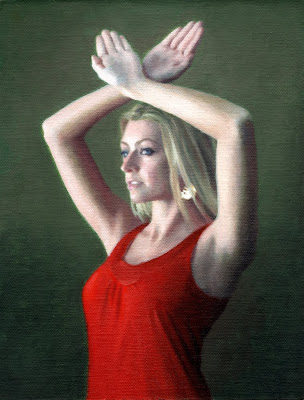 I have long been interested in the fundamental ways in which the figure has been represented in Western art. One way has been to represent it in a frontal, vertical, and somewhat symmetrical manner. This was typical of the Geometric period of ancient Greek art. It was also typical of medieval art. Another way has been to represent the figure more naturally, as in the Classical period of Greek art and again in the Renaissance. These two approaches express ideas about how the respective cultures understood their world. One approach suggests other-worldliness, the other approach suggests rationality and an engagement with the world. I often weigh both approaches when I pose the model. Here Kristin raises and crosses her arms directly above her head in a formal gesture. At the same time, we see her in three-quarter view, as opposed to frontally, thereby bringing both world views into dialogue.

Posted by Charles Pompilius at 9:41 PM