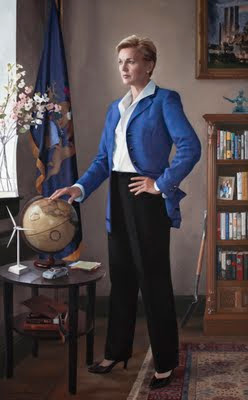 My portrait of Governor Jennifer Granholm was unveiled Friday at the Capitol Rotunda in Lansing, MI. It was a long, exciting day with lots of fanfare and media attention. I believe the Governor liked the portrait, and so far it has been well received by the public. I want to thank Governor Granholm’s staff, as well as David Klein, Jonathan Boos, my wife and family, and everyone else who contributed to the success of this project. I especially want to thank Jennifer Granholm for choosing me to paint her portrait. It was an honor.
Oil on linen, 84 x 52 inches, 2011
#72

Posted by Charles Pompilius at 9:01 PM